“The feature-length documentary BIRTH STORY: INA MAY GASKIN & THE FARM MIDWIVES tells the story of counterculture heroine Ina May Gaskin and her spirited friends, who began delivering each other’s babies in 1970, on a caravan of hippie school buses, headed to a patch of rural Tennessee land. With Ina May as their leader, the women taught themselves midwifery from the ground up, and, with their families, founded an entirely communal, agricultural society called The Farm. They grew their own food, built their own houses, published their own books, and, as word of their social experiment spread, created a model of care for women and babies that changed a generation’s approach to childbirth.

Forty years ago Ina May led the charge away from isolated hospital birthing rooms, where husbands were not allowed and mandatory forceps deliveries were the norm. Today, as nearly one third of all US babies are born via C-section, she fights to preserve her community’s hard-won knowledge. With incredible access to the midwives’ archival video collection, the film not only captures the unique sisterhood at The Farm Clinic–from its heyday into the present–but shows childbirth the way most people have never seen it–unadorned, unabashed, and awe-inspiring.” 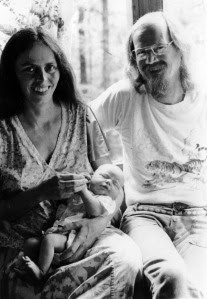 I really enjoyed Birth Story. It skillfully weaves together vintage footage, commentary, and births with a present day shadowing of Ina May in her natural environment: at the Farm. The documentary shows her working in her kitchen, eating, talking to her husband, watering plants, riding her bicycle, teaching workshops, training midwives, going to prenatal visits, and finally, attending a very hands-off gentle waterbirth. It also lets us peek at images from the early days of The Farm community, the caravan of buses, the dreams of Stephen Gaskin and the “hippies” who followed him to Tennessee. Birth Story is not just a film about Ina May though, it chronicles the experiences of several other Farm midwives as well, and I loved hearing the commentary and opinions of the less-famous midwives who helped transform the birth world.
I found footage of Ina May with Stephen to be particularly poignant and very much enjoyed the vintage photos and footage. I also find it interesting how The Farm began because of Stephen’s leadership and ideas and yet Ina May took off as the ongoing famous person in the family. Of Stephen, Ina May explains: “He thought women we supposed to be uppity—this was great relief, I didn’t like being held down.”

Ina May describes her own first birth explaining that in typical birth climates, “there’s nothing about the special energy of birth and that’s kind of the most important thing…I felt like I was doing something sacred.” She also makes the basic and crucial point that the number one rule of maternity care should be Be Nice and laughs as she asks us to consider how just those two words could change maternity wards. There are only a handful of actual births in the film, three of which are from sometime in the 1980′s. We see a breech birth (a lot more hands-on than I think of present-day midwifery practice) and a shoulder dystocia, both rare occurrences in birth films. We also see brief footage of Ina May’s Safe Motherhood quilt project and a brief discussion of disparities in maternal mortality rates. 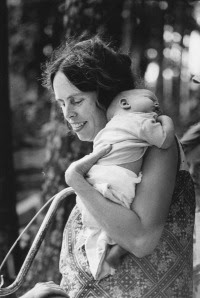 Another highlight of the film for me was midwife Pamela, whose birth we also see on-screen. She is shown telling us about an early birth she attended saying, “I fell in love with women. How can you see someone be so strong and not fall in love?” Exactly. My doula and friend, Summer, who watched the film with me, developed her reaction to this quote in a lovely blog post and it reminds me of my own past post about my own former midwife who helped me see that midwife means loves women. Ina May explains that she learned how to be a midwife by allowing herself to be instructed by the women themselves and then she trained other midwives. As I watched Birth Story I found myself feeling a little sad, nostalgic, and bittersweet, because I feel like the world that these beautiful midwives envisioned has yet to really be birthed and that in some ways we’ve gotten so far away from the relationship-oriented and community living/engagement model upon which The Farm was based.

My initial feeling as I watched the film was that it would be primarily of interest to people already very familiar with Ina May, thinking that it  may not appeal to or interest “regular” people. However, the friends I viewed the film with had totally different perspectives. One friend told me she thought her husband would really have liked the documentary, particularly for the emphasis on community. The one husband who was present reported that he thought everyone should see the film and not just people who are already “birth junkies.” So, I stand corrected, and will now say that Birth Story has the capacity to engage with many people!

In 2007, I had the opportunity to listen to Ina May speak in person at the La Leche League International conference in Chicago. She talked about sphincter law and made the association with our bodies’ capacity for bowel movements and women’s physical capacity to rebound from childbirth. I will never forget her saying: “I don’t know about you, but my butt closes back up after I poop.” That summed her up for me: plainspoken, real, matter-of-fact, and practical. She’s a legend!

–
Disclosure: I received a complimentary screening copy of the film for review purposes.
Posted by CfM Molly at 11:52 PM No comments: