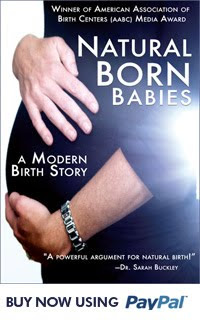 This lovely short film produced by a midwifery service in California, is a great “ad” for the benefits of homebirth and of midwifery care. Natural Born Babies has a very clean, fresh, and contemporary feel and features a multicultural collection of homebirth families talking about their experiences in front of a white screen. Something that is particularly striking is that some of the people speaking with love and enthusiasm about their midwives and their birth experiences include a cardiologist, an anesthesiologist, and an ER physician!

The first part of the film is titled Interventions and features both men and women speaking about birth, referencing how pregnancy and birth are treated like medical conditions and including a lot of discussion about the prevalence of cesareans. The point is made that, “no epidural can replace human touch.” The second part is titled The Birth Specialists and points out that OB/GYNS are pathology specialists, whereas midwives are trained in normalcy—“we take low-risk women, and keep them low-risk.” Midwives are specialists in normal pregnancy and birth. Because of the film’s emphasis is wholly on out-of-hospital birth and hospitals are critiqued very soundly, hospital-bound couples viewing the film may find that it causes their defenses to rise.

Several of the parents are holding their babies as they speak and a CNM speaks briefly as well (citing both ACNM and MANA). The CNM manages Orange County’s only accredited birth center. I enjoyed the presence of a bio-physicist dad originally from Holland saying, “everyone I know was born at home” and noting that “you give birth the same way you live.” Several of the couples speaking do refer to the father as “delivering” the baby, which is a long-term pet peeve of mine.

Special features include a 10 minute version of the film, an outtakes section, and a look inside the South Coast Birth Center. At the end of the film we see that one of the couples is the director/producer of the film.

Natural Born Babies is a fast-paced film and though it is filmed in a “talking heads” format, it cuts quickly from person to person, thus keeping the viewer engaged. If you are looking for an informative video that is homebirth and midwifery friendly, but that does not include any birth footage, this would be a good addition to your library.

--
Disclosure: I received a complimentary copy of the film for review purposes.
Posted by CfM Molly at 8:02 AM

Thank you all and a nice day