When Kara Kay started feeling crampy contractions on a Tuesday, she didn’t call a hospital or obstetrician. She didn’t have one. Instead, around 11 a.m. on Tuesday, February 1, Kara called her husband, Mike Benedict, and her Certified Professional Midwife, Deborah Smithey. Then, she sat back, enjoying the early feelings that she knew would eventually bring her her baby. While she waited comfortably inside, the worst blizzard in 100 years raged outside, and Deborah and Mike worked to make their way to Kara.

Choosing a Midwife
A hospital birth was never an option for Kara. “I’ve never been really comfortable with a hospital,” she says. “I never imagined I would have a birth in a hospital.” Mike agrees. After typical hospital experiences with his first two children, he was ready for a change. “It allows the father to be much more involved,” he says of his home birth experience.

A Certified Professional Midwife provides more in-depth care, Deborah says. Prenatal visits usually last an hour or more, and whatever is on the mom’s mind is up for discussion. Of course the CPM also checks how the mother is doing physically: blood pressure, pulse, fetal heart rate and growth. Midwives also focus on a lot on nutrition and overall health during pregnancy.

For Kara and Mike, the safety of home birth was a big factor for them, too. “I feel it’s safer overall, because there aren’t any doctors to force you to take unnecessary drugs or inventions that tend to cause more problems that solve them,” Mike says. Deborah cites a 2009 study that confirms these claims. The study, “Outcomes of Planned Home Births with Certified Professional Midwives: Large Prospective Study in North America” by Kenneth C Johnson and Betty-Anne Daviss, found that birth at home is safer, has better outcomes and fewer interventions.

Getting There
Mike knew the storm was coming and was planning to come home from work early anyway, but when he got the call from Kara, he left so he could get home to be with his wife. Getting there, though, proved to be a 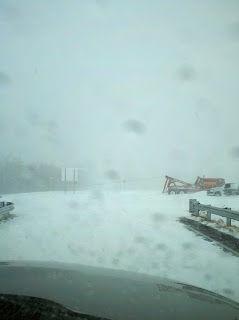 challenge, as the snow fell and cars and trucks slid into ditches on either side of the highway. “It was just white; you couldn’t see anything,” he said. After his own car ended up in a ditch, someone picked him up, but that car ended up in a ditch, too. Not really sure what he should do next, Mike started walking and running the mile-and-a-half home. “When I saw the tow-trucks and 18-wheelers stuck in the snow, I started to panic. That’s when I started to get anxious.” The couple of mile journey too him over an hour. “By that time, I was pretty nervous. I was ready to get home,” he says.

The midwife’s journey took even longer. She and her husband left Stockton at about 1 p.m. Normally, her drive to Carthage takes about an hour. They drove a four-wheel-drive truck to maneuver through the 13 inches of snow, with more falling by the minute. In the back seat of the truck, she had her midwifery supplies packed. “The roads became more and more treacherous as we went,” she says. “At one point, we couldn’t see the road at all.” To break through the snow drifts, they had to drive fast, but were also sure to go slow enough, so as not to lose control.

When they finally made it to the highway, they expected to it be clear. Normally, highway 71 is a four-lane highway, but only one lane was moving. “Semi-trucks and pick-ups were stranded on both sides of the road, and some were even stopped in the road,” Deborah says. “I have never seen anything like it.”

Deborah and her husband made it to Kara at 4:30 p.m. The one-hour journey took three hours.

Labor Land
Pregnant with her first, Kara expected a longer labor. Though the world outside was urgent with worries of weather and time, Kara sat comfortably in her home, not worried at all. “I just didn’t realize how bad the weather was,” she says. “I wasn’t concerned.”

As labor progressed through the afternoon and night, Kara used what she had learned in her Bradley Method class. She worked on breathing slowly and had visualizations and mantras ready to help her get through the tough times. “I’m just in labor land; I’m just passing through, “she repeated.

When it was finally time to push the next morning, February 2, Kara worked hard. She says, though, that she never felt the head descend. She counted on Mike and Deborah’s encouraging words. “I didn’t feel like I was getting anywhere,” she says.

Once the baby’s head came out, the midwife helped deliver the baby’s stuck shoulders. Called shoulder dystocia, this complication can be rather painful, yet Kara didn’t know it was happening until later. She continued to rely on her midwife’s encouragement. “Deborah reached up; it wasn’t invasive at all,” Mike says. “At that point, I was really glad that Deborah braved the storm.”

Snow Baby
Mike caught his daughter, Kaliyah Winter, at 7:49 a.m.. She weighed 9 pounds, 12 ounces. “I don’t think this experience will ever leave my mind,” he says.

For her post-partum care, Kara stayed put and was able to enjoy time with Kaliyah. “The midwife came to us,” Mike says. “I didn’t have to lug my baby out in the cold and snow.”

After she realized the snow’s devastation, Kara couldn’t help but be grateful for the midwifery model of care. “This just shows the dedication, loyalty and passion of midwives,” she says. “I’m totally thankful to Deborah and her husband.” 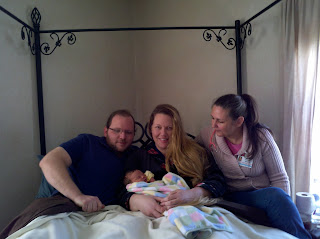 When there’s a natural disaster, Deborah asserts that midwives are best to handle birth. She asserts that it would be ideal for every Missouri county to have a Certified Professional Midwife ready to handle births in an emergency. “Common sense tells us that it would be far safer for a midwife to travel to a birthing mother then have a mother risk delivering along the side of the road in horrible conditions,” she says. In addition, CPMs are trained to handle common complications, such as cord entanglement, shoulder dystocia and post-partum hemorrhage.

For Mike and Kara, the intensity of the storm outside was nothing to compare to the positive feelings associated with bringing a new baby peacefully into the world. “It’s just a miracle, and I’m thankful everything turned out,” Kara says.

--
In addition to being a wife and mother to two boys with another due in May, Katie Tonarely spends her time writing for several publications, including Springfield, Missouri's "News-Leader" and "Moms Like Me." She also does web content writing for Demand Media Studios.

For more about homebirth and midwifery in Missouri see:
http://www.friendsofmomidwives.org
Posted by CfM Molly at 4:23 PM

What an incredible story of the passion and dedication of a midwife!
Thank you so much to these wonderful ladies!

THis is such a nice story, thanks for writing and publishing it. So much happier than all the crazy stories of trying to get the mother to the hospital in a storm like that.

Amen! Missouri needs to step up to the plate (and MO OBGYNS need to back down).